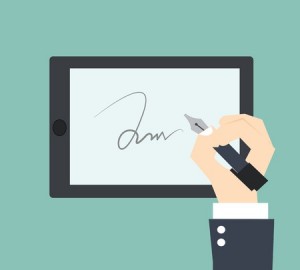 Looking to cut back on printing? The paperless office is on the rise, and not just for environmental reasons! Reducing the number of forms piled up on your desk is the first step to cultivating a more productive work environment—and just think of the money you’ll save on ink by going paperless. If this sounds enticing (and it should), start by trying one of these five digital signature services on for size.

1. Adobe Document Cloud
If you’re already familiar with Adobe, Document Cloud eSign (formerly EchoSign) could be a good fit for you. Document Cloud features a handy tracking feature that allows you to follow your document’s progress every step of the way. Once your forms are signed, they’re automatically archived in the cloud for effortless access later on—no more messy filing cabinets. Document Cloud also offers a variety of extra security features, such as a phone authentication code for those who are signing on a mobile device. Box and Google Drive users have easy integration options. Pricing starts at $14.99/month for the individual subscription plan.
2. CudaSign
Formerly known as SignNow, CudaSign boasts that its services reduce turnaround time for documents “by as much as 90%.” If you’re someone who utilizes the same form over and over, you’re likely to benefit from CudaSign’s template feature. Like most eSignature services, CudaSign provides secure cloud storage as well as options for those who wish to export and archive documents (Dropbox users, take note). And if you’re particularly interested in a mobile app, CudaSign has ranked #1 of Apple’s eSignature app offerings for the last three years. Plans start at $1/month.
3. DocuSign
If you’re dealing with clients who tend to send documents back with signatures missing, DocuSign could come in handy. This straightforward service features a tagging option that lets the sender indicate exactly where a signature, initial, or date is required. With the DocuSign dashboard, you never have to wonder where your document is in the signing process. This eSignature service provides fairly comprehensive cloud storage service integration, with options for Box, Dropbox, Google Drive, and OneDrive. Try out DocuSign’s intuitive interface with plans starting at $10/month.
4. HelloSign
HelloSign champions “bank-level security” with two-factor identification for those who are still nervous about signing documents digitally. This eSignature service helpfully gives you a status notification each time there is an update to your document. HelloSign offers a comprehensive selection of features including template usage, branding capabilities, and cloud syncing. It’s ideal for the Google user, as it provides integration for Gmail, Docs, and Drive, as well as other apps and services like Box, Dropbox, Evernote, and One Drive. There is also a host of business class features that allow for the addition of team members and more. There’s a free plan that’ll let you test the waters, and paid plans start at $13/month.
5. SignEasy
Previously featured in the Apple iPad video campaign, SignEasy is a service that caters to the small business and individual user crowd. Users can integrate with Box, Dropbox, Evernote, and Google Drive, and security offerings include passcode and Touch ID authentication. If you don’t need to sign documents very often, but still want to enjoy the benefits of an eSignature service, SignEasy notably offers a pay-as-you-go plan with a 10 documents for $5 offer. Yearly plans start at $40.