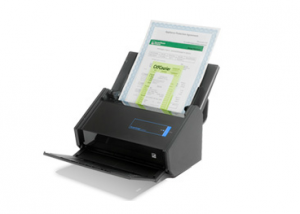 If you are a regular online fax user, chances are you also use – or could be in the market for – a document scanner.

Document scanners, unlike the scanners that are attached to printers, quickly scan large volumes of documents, receipts, or business cards, and what’s more, can send them to email, cloud storage, mobile devices, or directly into documents. For anyone who’s interested in going paperless, these devices are a big help.

Two of the most popular document scanners come from Neat and Fujitsu. Neat offers two document scanners, the NeatConnect, and NeatDesk. NeatConnect goes for $499.95, and the Desk for $399.95. Fujitsu also offers a few ScanSnap products, including a contactless scanner and USB scanner. Here’s a look at how they compare, side-by-side. For this comparison, we focused on NeatConnect, which has more features and a similar price tag, next to ScanSnap’s $495 iX500 wireless desktop scanner.

Both are very compact; the ScanSnap comes in at 11.5 inches by 6.5 inches, and the NeatConnect is 11 by 8.7. If every inch of desktop space counts, the ScanSnap wins here, although it weighs slightly more; just over six pounds, compared with NeatConnect’s five pounds.

Both devices can send scans to a wide range of destinations.

NeatConnect will let you send scans to Microsoft Word, Dropbox, Box, GoogleDrive, Evernote, and OneNote. When you buy a NeatConnect you’ll also get a 90-day free trial of the Neat Cloud service. It’s worth noting that there are a few applications – like Excel, Quicken, and TurboTax – that you can only send scans to with this service. Prices on that service range from $60 to $240 annually, depending on how many users you have. The Neat Cloud service will also sync with your mobile device.

Both are Mac- and PC-compatible, and both have received high marks from reviewers for ease of use right out of the box. Both are also wireless, which means you can scan without your computer.

ScanSnap has a few notable and time-saving features, including recognition of paper orientation, which means it turns documents the correct way. It removes blank pages, straightens crooked images, and crops documents. It also recognizes business cards and receipts, and automatically puts their information into databases. ScanSnap uses something called Optical Character Recognition, which lets you search for a document you’ve saved by words in that document. The ScanSnap will scan up to 50 sheets at a time.

NeatConnect doesn’t have the same document-straightening feature, but it does include different slots for various sizes of paper and documents that help keep them straight. It’s also won praise for making clear scans of creased and stained paper. Like ScanSnap, NeatConnect extracts data from your scans in order to make it easy to search for them. It also lets you create spending and expense reports, and share (and comment on shared) folders and items. It will scan up to 50 sheets at the same time without the paper tray, or, with the paper tray, up to15 business cards, 15 receipts, and 15 letter-size documents at one time.

Out of the box, Neat does a few more things than ScanSnap, like rotating images. However, ScanSnap comes with software that lets you access additional features, including Adobe Reader.

Both of these scanners are similar in price, features, and performance. One of the biggest differences between them is that NeatConnect works best if you’re willing to buy into the entire Neat environment through its cloud services. It will do things like automatically classify forms, including tax documents, but you have to pay for that service. If you don’t need those features and don’t want to subscribe to a cloud storage solution, ScanSnap is a great choice.

Which Top Cloud Storage Service Is Best for You?
Scroll to top